Dr Senthil Kirubakaran is a well-respected consultant cardiologist and electrophysiologist based in Portsmouth, specialising in palpitations and cardiac arrhythmias, catheter ablation for atrial fibrillation, supraventricular tachycardias (SVT), accessory pathways (WPW) and atrial and ventricular tachycardias alongside pacemaker implantation. He privately practices at the Spire Portsmouth Hospital and Queen Alexandra Hospital. His NHS practice is based at Portsmouth Hospitals University NHS Trust at the Queen Alexandra Hospital.

Dr Kirubakaran has an honours degree in Medicine from the University of Manchester (1998) and after being awarded a British Heart Foundation research grant for research in the field of cardiac electrophysiology and atrial fibrillation, he was awarded an MD from the university in 2011. His further training took place at leading cardiac centres in London, following which he went to Milan, Italy, where he undertook specific training in complex arrhythmia management.

Dr Kirubakaran has extensive experience in all aspects of adult general cardiology, however his specific interest and expertise is in assessing and managing patients with abnormal heart rhythms (arrhythmias). His expertise is illustrated in his current clinical practice, where he is the lead for the arrhythmia service at the Queen Alexandra Hospital, where he introduced and developed the ablation service to the Trust in 2014, which now offers a comprehensive service with state of the art technology for patients with cardiac arrhythmias.

Dr Kirubakaran is committed to medical education and knowledge. He introduced a regional Wessex arrhythmia teaching program for doctors, cardiac physiologists and specialist arrhythmia nurses in 2016 and has written book chapters on cardiac arrhythmias and is currently writing a book on the Interpretation of the ECG (Electrocardiogram) for junior doctors.

Dr Kirubakaran's research has been published in various peer-reviewed journals and he is a Principle Investigator for a number of multicentre clinical trials in the field of cardiac arrhythmias and catheter ablation. He is accredited in cardiac electrophysiology from the International Board of Heart Rhythm Examination (IBHRE-CEPS) and has been awarded a fellow of the Royal College of Physicians (FRCP) and Heart Rhythm Society (FHRS).
Read more 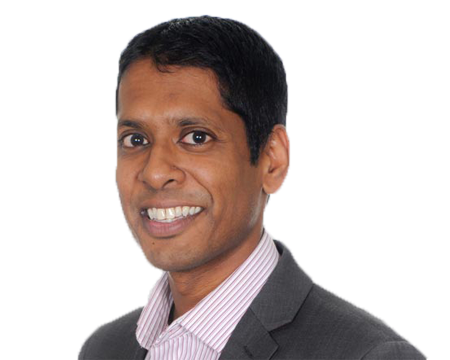 What is it? Atrial fibrillation is a heart rhythm irregularity that causes the heart to beat fast or irregularly. It affects around 4% of peopl...

What are palpitations? Palpitations are heartbeats that feel either too fast or too hard, and some...

What is cardiac ablation? Cardiac, or catheter ablation is a treatment which is used to treat ...

What is arrhythmia? An arrhythmia is also known as a heart rhythm problem, causing the heart to either beat too fast (tachycardia), too slow (b...

Very friendly - couldn’t have been any easier

Dr Kirubakaran is comfortably the best consultant I have seen over the past 50 years during which I have had twelve operations for various problems. I would thoroughly recommend him.

I was delighted with the consultation. The time taken to answer my questions in a language that was easy to understand reassured and convinced me that I am in safe hands. I would have no hesitation in recommending Dr Kirubakaran.

I would certainly recommend Dr Kirubakaran, he has certainly worked to ensure I am able to have my operation in a few weeks.

Dr Senthil Kirubakaran was excellent. He listened well and explained the pros & cons of treatment clearly, taking into account my thoughts. He then charted a plan for my further cardiac assessment and possible treatment. Absolutely top notch.

Dr. Kirubakaran explained everything to me and answered all my questions. Nothing was too much trouble for him. He was an extremely pleasant person to see.

Listened carefully, asking supplemental questions and providing clear explanations of the potential reasons for symptoms. Concluded with precise description of proposed course(s) of action, checking for my agreement throughout. A very satisfied patient.

Dr Kirubakaran was great.Really listened to my symptoms and was able to diagnose me.Previous doctors I have seen have disregarded the symptoms so I am relieved to have a diagnoses and not have to worry anymore.The nurse who took my ecg was very friendly

He is very thorough, always explains things fully and allowed me to have an informed discussion on options. He has put my mind at ease on each occasion and I’ve had first class treatment. He and his office are also very responsive between appointments.

Absolutely first class in all respects. Would thoroughly recommend.

Dr Kirubakaran performed an ablation on my heart to rectify paroxysmal atrial fibrillation. The result has been life changing. I was warned that I might need a second procedure but the first corrected the problem,

A few months ago I had, which for me, was a very distressing heart scare. To my great relief Dr Kirubakaran agreed to see me very quickly. I found him to be a very friendly and he dealt with my problem in a professional manner, my sincere thanks to him.

THe initial consultation was fine - he was courteous and had good listening skills. I am happy to move on to a monitoring programme.

Any cookies that may not be particularly necessary for the website to function and is used specifically to collect user personal data via analytics, ads, other embedded contents are termed as non-necessary cookies. It is mandatory to procure user consent prior to running these cookies on your website.